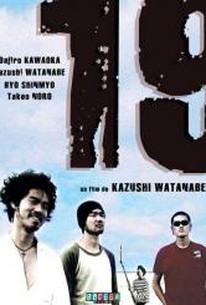 A young man finds himself taken captive by a group of outlaws with unexpected results in this independent comedy-drama from Japan. Usami (Daijiro Kawaoka) is a college student who, while riding his bicycle across campus one day, is knocked to the ground and dragged away by three thugs. Usami isn't sure what the strangers have in mind -- they don't seem to want his money, and they make no attempt to obtain a ransom for his return. As time passes, Usami gets to know his captors, and discovers they're simply three like-minded outcasts who do this sort of thing as an unusual way to meet new people. Oddly intrigued, Usami decides to join their group, and he helps them stage another random abduction; however, this time their victim is not so willing to cooperate. 19 was the first feature film from writer/director Kazushi Watanabe, who also plays the leader of the kidnappers. ~ Mark Deming, Rovi

There are no critic reviews yet for 19. Keep checking Rotten Tomatoes for updates!

There are no featured audience reviews for 19 at this time.