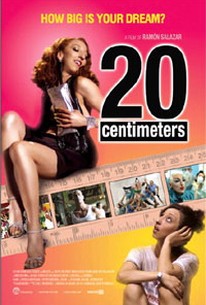 A fantasy-prone transvestite who is looking to make the leap to transsexual status imagines that he is the star of a lavish universe punctuated by elaborate musical numbers in director Ramon Salazar's stylish sophomore feature. Adolfo (Monica Cervera) is a die-hard romantic who currently shares a cramped apartment with Tomas (Miguel O'Dogherty). Though he was born a man, Adolfo prefers to go by the name Marieta, and is currently stashing away the money needed to shed the male appendage that is holding him back from full womanhood. Sex-change operations don't come cheap, though, and in order to raise said money Marieta must first land a decent-paying job. Though one successful interview does find Marieta hired as a railroad-station cleaner, the exhausted worker immediately falls asleep on the job and is quickly fired for doing so. It is in his sleep that Marieta truly comes alive, though, and after falling asleep during a conversation at a nearby market, the dreamland Ginger Rogers is pulled to safety by handsome stock boy El Reponedor (Pablo Puyol). As an intensely sexual relationship begins to develop between Marieta and El Reponedor, the aspiring transsexual discovers that even if he himself doesn't appreciate his one defining male characteristic, there are others out there who most certainly do.