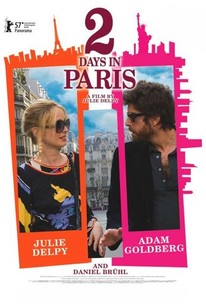 Delpy proves not only to be an adept actress, but makes her mark as a writer and director in this thought-provoking comedy that breaks the romantic comedy mold.

Ingenue Julie Delpy does triple duty as writer, director, and star of this romantic comedy. French photographer Marion (Delpy) and American interior designer Jack (Adam Goldberg) are returning from a vacation in Venice. Despite the fact that it was supposed to be the ultimate romantic getaway, disagreements and misunderstandings seemed to drive them farther apart rather than bringing them closer together. Before they return to the United States, Marion and Jack have a quick two-day stop in Paris to visit Marion's parents and pick up the cat that they had been pet-setting for their daughter. Unfortunately for Jack, Paris proves to be quite a culture shock. Not only are Marion's parents a pair of eccentric former "revolutionaries" who make no qualms about having knock-down-drag-out arguments regardless of who's present, but they also appear to have a particular distaste for Americans. Add to this the fact that Marion's friends hold nothing back when it comes to discussing their sexual lives, seem fixated on food rituals, and that Marion seems to run into former lovers on every street corner, and Jack quickly begins to suspect that he doesn't know his girlfriend half as well as he thought he did when they were living the simple life back in New York. ~ Jason Buchanan, Rovi

News & Interviews for 2 Days in Paris

Shaun the Sheep and The Get Down Available on Hulu and Netflix This Week
RT on DVD: The Brave One, Assassination of Jesse James Fire Onto DVD
Julie Delpy talks about Two Days in Paris with RT
View All

Critic Reviews for 2 Days in Paris

Audience Reviews for 2 Days in Paris