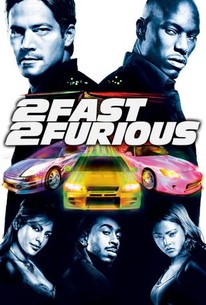 Beautiful people and beautiful cars in a movie that won't tax the brain cells.

Vin Diesel opted to not appear in the sequel to the film the shot him to stardom in the first place, The Fast and the Furious. With the character of Dominic Toretto out of the picture, 2 Fast 2 Furious concentrates exclusively on the latest exploits of undercover agent Brian O'Connor, played by Paul Walker. In addition, with director Rob Cohen passing, producers have added a dash of credibility to the sequel by hiring John Singleton to helm. What does completely remain from the first film is the presence of fast-living underground street-racing gangs. Moving from Los Angeles to Miami, O'Connor is looking to redeem himself after the events of the first movie, so he again goes undercover to infiltrate another group of thuggish car enthusiasts. This time around he's enlisted the help of ex-con Roman Pierce (Tyrese) and fellow agent Monica Celemente (Eva Mendes) to bring down Carter Verone (Cole Hauser), an importer/exporter who heads up a massive drug trafficking operation. Heading up the supporting cast are hip-hop stars Ludacris and Fabolous. ~ Matthew Tobey, Rovi