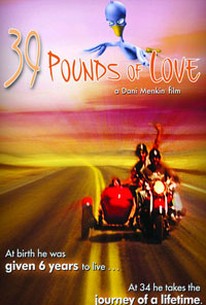 39 Pounds of Love is a heart-tugger that often crosses the line between uplifting and sappy.

Ami Ankilewitz was born a normal child, but he contracted a rare form of muscular dystrophy when quite young and was not expected to live past the age of six. Ankilewitz managed to beat the odds, and at the age of 34, he was alive and living with his disabilities; despite weighing only 39 pounds and having very limited mobility, Ankilewitz worked as a digital animator in Israel, and had fallen in love with Christina, one of the caregivers who looked after him. When Ankilewitz's romance with Christina fell apart around the same time he turned 34, he decided it was time to make a few of his long-time dreams come true -- Ankilewitz wanted to see the United States, ride a motorcycle, and see the doctor who years ago had told him he would not live past six. Given his fragile condition, making Ankilewitz's wish a reality was no small accomplishment, and 39 Pounds of Love is a documentary which follows Ankilewitz and his crew as they worked out the logistics of bringing him to America, as well as their coast-to-coast journey to reunite Ankilewitz with his childhood doctor. Extensive examples of Ankilewitz's animation are also included in the film.

News & Interviews for 39 Pounds of Love

Ohio Film Critics Offer Up Their Year-End Picks
"Penguins," "Murderball," and 13 Other Docs Vie for Oscar Eligibility
View All

Critic Reviews for 39 Pounds of Love

Audience Reviews for 39 Pounds of Love

There are no featured audience reviews for 39 Pounds of Love at this time.