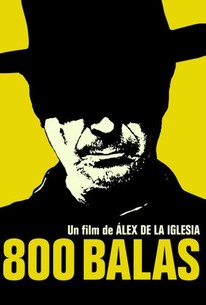 A hyperstylized tribute to spaghetti westerns courtesy of fearless Spanish director Alex de la Iglesia, 800 Bullets finds young Carlos (Luis Castro) striking out on his own in search of his long-lost father. Swiping his shrewish businesswoman mother's (Carmen Maura) credit card and setting his sights on Almeria, Carlos begins his quest to learn the truth about his father after his curiosity is sparked while thumbing through old photographs. Carlos comes into contact with his alcoholic grandfather Julian (Sancho Gracia) shortly after arriving in Almeria, where the one-time Clint Eastwood stunt double is still chasing his dreams of stardom. Rumored to have caused Carlos' father's death years earlier when a dangerous stunt went horribly awry, Julian now spends his days staging elaborate Western shows for tourists on the abandoned film sets. As the young boy quickly wins the affections of the rough and tumble stunt crew, the arrival of his mother begins to threaten his newfound happiness when she reveals plans of turning the location into an amusement park. As the hapless crew faces the prospect of being displaced by the greed of modern society, they are forced to defend thier territory by replacing their blanks with 800 real bullets.

Berta Ojea
as Ángeles
View All