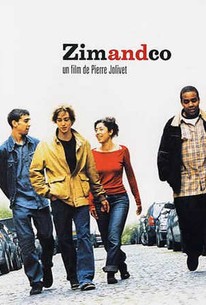 A minor scooter accident turns into a comic nightmare for an aimless young man and his friends in Pierre Jolivet's Zim and Co. Victor Zimbietrovski, or Zim (Adrien Jolivet, the director's son), works hard, but not in any organized way. He plays guitar in a band, and he has a couple of odd jobs, off the books. He lives with his easygoing mother (Nathalie Richard) and he gets by. But when he accidentally sideswipes a vengeful motorist, he ends up in a great deal of trouble. He tests positive for marijuana, and because it's his second offense, there's a good possibility he'll have to do time. The judge tells Zim he might avoid jail if he can prove that he has a job. Zim manages to land a job working for a sporting goods company by telling them he has a car. Now he has ten days to produce a high-school diploma, a driver's license, and a car, or he'll probably end up in the slammer. He turns to his friends, who have problems of their own. Arthur (Yannick Nasso) has to deal with his strict father, who tells Arthur he doesn't "deserve to be French" when Arthur's kicked out of a mechanic's training program by the bigoted teacher. Cheb (Mhamed Arezki) is trying to sell the latest gadget he's invented, a cell phone locator, while Cheb's cousin Safia (Naidra Ayadi) has been fired from her waitress job for dipping into the till, and needs a new place to live. Still, the four stalwart, resourceful friends band together against an uncaring and often racist bureaucracy, determined to help Zim stay free. Zim and Co. was shown by the Film Society of Lincoln Center as part of their Rendez-Vous with French Cinema in 2006.

Critic Reviews for Zim and co.

There are no critic reviews yet for Zim and co.. Keep checking Rotten Tomatoes for updates!

Audience Reviews for Zim and co.

There are no featured audience reviews for Zim and co. at this time.