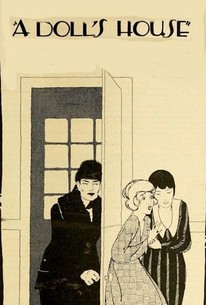 Henrik Ibsen's play had already been filmed twice before, in 1917 starring Dorothy Phillips, and in 1918 with {Elsie Ferguson}. But this time around the star was dramatic actress Alla Nazimova, who had played Nora Helmer on stage in New York twice -- once in 1907 and again in 1918. The biggest problem with A Doll's House, circa 1922, however, was that the emancipation of a young housewife was no longer a big deal -- women had won the right to vote a couple years earlier and millions of flappers were further flaunting their independence. On top of that, the 42-year-old Nazimova tried a bit too hard to act like a woman more than ten years her junior and it showed, in her performance if not necessarily in the nicely done photography. For those who aren't familiar with the play, here's a recap of the plot: When Torvald Helmer (Alan Hale) needs to travel south to save his life, his young wife, Nora, gets a loan from ex-convict Nils Krogstad (Wedgewood Nowell) by forgi ng the name of her dead father. Years later Nora, now a mother, is still playing the capricious young girl for her husband, who has become an executive at a bank. He wants to fire Krogstad, but Nora begs him not to. When Torvald discovers the reason why, he cruelly upbraids her and casts aspersions on her character. Finally, Nora can no longer take her selfish, self-centered spouse and she walks out on him and her family. Charles Bryant (Nazimova's partner and lover) received credit as director, but it's likely that his creative involvement was practically nil. Nazimova also financed the film herself, which was unfortunate, since it lost money at the box office. This drama, like most of Nazimova's films, is lost. ~ Janiss Garza, Rovi

Critic Reviews for A Doll's House

Audience Reviews for A Doll's House

There are no featured audience reviews for A Doll's House at this time.