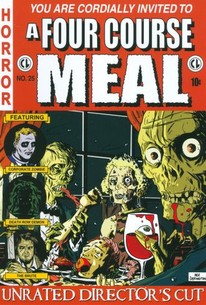 A quartet of short tales of cannibalistic terror are collected in this horror anthology. A group of scientists are trapped inside a secure laboratory where a profoundly dangerous contagion has been formulated. Leaving the lab would mean releasing the deadly cargo to the world, but when the researchers run out of food, their sense of self-preservation comes up against their desire to protect others. Elsewhere, an affirmative action lawsuit results in a legal decree that states employers cannot discriminate against zombies in their hiring practices, giving brain-eating ghouls a whole new level of visibility. Later, three strange women with magical powers are determined to capture a young orphaned child, but a hulking giant is determined to protect the youngster's safety. And finally, a demonic creature that feeds on human flesh has made its way into a maximum security prison, where it begins preying on the prisoners on death row. However, one of the condemned men is not about to give up his life without a fight. Featuring songs and a cameo appearance from Mojo Nixon, A Four Course Meal was the first feature film for director Clay Liford.

There are no critic reviews yet for A Four Course Meal. Keep checking Rotten Tomatoes for updates!

There are no featured audience reviews for A Four Course Meal at this time.