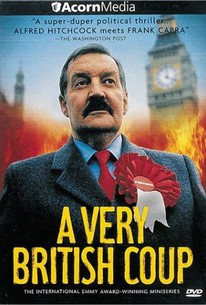 Based on the speculative political novel by Chris Mullin, this British miniseries starred Ray McAnally as Harry Perkins, a third-generation Communist, lifelong steelworker, and a powerful labor leader. Thanks to strong support from the industrial countries, Harry was elected Prime Minister of England, whereupon he set to work putting his left-wing ideals in action. Harry's efforts were compromised by a vast right-wing conspiracy, fomented by a number of important Conservative money men and set in motion by Britain's' MI5 and America's CIA. The winner of four BAFTA awards, including Best Drama Series and Best Actor (Ray McAnally), A Very British Coup aired in three parts over Britain's Channel 4 from June 19 to July 3, 1988. ~ Hal Erickson, Rovi

There are no featured audience reviews for A Very British Coup at this time.