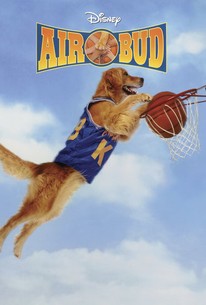 A charming children's movie about a lonely boy and a dog who can shoot hoops.^L^C5 Since his father's death, Josh Framm (Kevin Zegers) has become increasingly withdrawn. Even basketball, once his passion, scarcely seems to matter. His worried mom (Wendy Makkena) moves the family to a small town near where she grew up, hoping that a fresh start will revive Josh. But he doesn't fit in well at school, and seems worse than ever. Until he finds Buddy, an abandoned golden retriever who can nose a ball into a net better than any dog has a right to. With Buddy at his side, Josh finds the courage to try out for the school team and come out of his shell around other kids. Buddy becomes the team's mascot and inspired by the pooch and their new coach, a former pro named Arthur Chaney (Bill Cobbs), they begin winning. But everything comes crashing down when Buddy's owner, a nasty party clown named Norm Snively (Michael Jeter), shows up to claim his dog.^L^C5 AIR BUD's story is nothing strikingly original, except for the gimmick of the basketball-playing hound. But it's told with skill and a great deal of heart, and greatly enhanced by subtle performances from Zegers, Cobb and Makkena, who manages to make Mrs. Framm less insipid than is the standard for moms in kid's movies. They are, of course, all thoroughly upstaged by Buddy, a sweet-faced dog with irresistible eyes. Add in the solid values that drive the story--the significance of teamwork, the importance of family, the merit in not giving up--and AIR BUD is a very attractive family package.