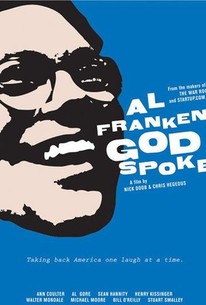 This documentary traces Franken's transformation from humorist to activist with entertaining, if uneven, results.

The makers of "The War Room" turn their cameras on yet another burgeoning political career. "Al Franklen: God Spoke" is a cinema verite pursuit of Al Franken, shot over the course of two years, which follows the former Saturday Night Live comedian turned best-selling author and political satirist, from his highly publicized feud with Bill O'Reilly over Franken's blockbuster "Lies and the Lying Liars Who Tell Them" to his relentless campaign against George Bush and the Right Wing in the 2004 election, and beyond. From his USO tour in Iraq, to the studios of liberal radio network Air America and onto the campaign trail, filmmakers Nick Doob and Chris Hegedus are granted entré to one of the most effective political satirists of our time. Franken fearlessly confronts pundits and politicians, blurring the boundaries between political satire and impassioned citizenry. Featuring a host of beltway insiders including Ann Coulter, Michael Moore, Al Gore, Robert Kennedy Jr., Sean Hannity, William Safire, Karen Hughes and Henry Kissinger, the film is an often hilarious look behind the front lines of the media wars during the most contentious election in recent history. But ultimately, "Al Franklen: God Spoke" is a personal drama of transformation as Franken moves from his seat in the sidelines to become a contender in the political ring.