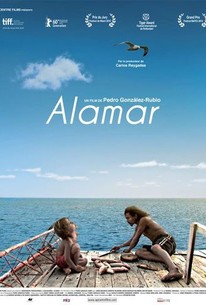 Alamar (To the Sea)

Alamar (To the Sea) Photos

A young boy and his father learn about living in harmony with nature in this languid drama from filmmaker Pedro Gonzalez-Rubio. A man from Mexico (Jorge Machado) travels to Italy and falls in love with a beautiful local woman (Roberta Palombini). Their feelings for one another are strong, but they prove to be short lived, and when they decide to beak up after the birth of their son Natan, he returns to Mexico while she stays in Italy and takes primary custody of the child. However, the father strives to remain a presence in his son's life, and the boy visits his father at least once a year. As the five-year-old Natan travels to Mexico, his father has joined the family' fishing operation near the coral reefs of Banco Chinchorro. Living in an elevated cottage near the shore, Natan and his family devote their summer to an idyllic existence, spending their days catching the plentiful fish and observing the wildlife, and their nights sitting by the fire and admiring the stars. To the father, this simple life teaches an important lesson of existing in peace with the natural world, and Natan comes to see himself as being as much a part of this environment as the fish, the waterfowl and the seaweed. Alamar (aka To The Sea) was the first solo directorial credit for cinematographer Pedro Gonzalez-Rubio.

News & Interviews for Alamar (To the Sea)

Critic Reviews for Alamar (To the Sea)

Audience Reviews for Alamar (To the Sea)

Alamar (To the Sea) Quotes