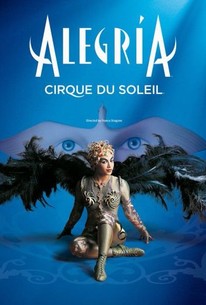 The acclaimed Canadian performance troupe Cirque de Soleil, which combines acrobatics, magic, music, and theater into spectacular stage productions, brings one of their most popular shows to the screen in Alegria. Frac (Rene Bazinet), a mime who is suffering from a severe bout of depression, happens to meet a troupe of circus entertainers and immediately falls in love with one of the stars, Giulietta (Julie Cox). But while his affection for Giulietta and admiration for the performers gives him a new lease on life, Giulietta's father (Frank Langella), the leader of the troupe, opposes the relationship and is determined to keep them apart. Meanwhile, Frac and Giulietta discover a gang of children who are held prisoner by a criminal leader (Heathcote Williams) who forces them to do his bidding, and they devise a plan to win the kids their freedom. While Alegria offers plenty of the theatrical dazzle that has made Cirque de Soleil famous, it has a stronger narrative structure than the original stage production and blends the talents of several noted film actors with the stars of the Cirque company.

There are no critic reviews yet for Alegría. Keep checking Rotten Tomatoes for updates!