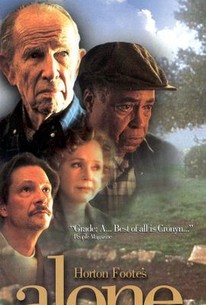 A lonely man receives some not entirely welcome attention from his children in this drama written by Horton Foote. John Webb (Hume Cronyn) is an aging farmer from Texas who recently lost his wife and is coming to terms with spending the rest of his days on his own. An oil company believes that there may be oil on John's property and is willing to pay him handsomely for drilling rights. However, John isn't certain he likes the idea, and he soon comes into conflict with his family, who thinks that John could be letting a fortune slip through his fingers. Produced for the Showtime premium cable network, Alone boasts a superb supporting cast, including James Earl Jones, Shelley Duvall, Chris Cooper, and Frederic Forrest.

There are no critic reviews yet for Alone. Keep checking Rotten Tomatoes for updates!

There are no featured audience reviews for Alone at this time.