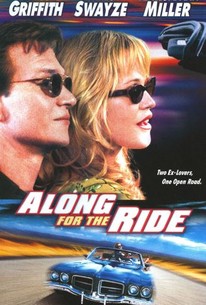 A man discovers his past hasn't just caught up with him -- it's taking him on a cross-country road trip in this edgy comedy. Level-headed Ben (Patrick Swayze) gives his less-than-stable girlfriend Lulu (Melanie Griffith) her walking papers and heads out to California, in hopes of breaking into the movie business as a screenwriter. Seventeen years later, Lulu checks out of a mental hospital and appears at Ben's doorstep in Los Angeles, claiming that she was pregnant at the time they broke up and that she was forced to put their child up for adoption; after all these years, Lulu has decided it's time they paid their son a visit. Lulu forces Ben to drive her to Wisconsin in search of their son, while Ben's wife Claire (Penelope Ann Miller) hops on a plane to Wisconsin in hopes of capturing Lulu upon arrival. Forever Lulu marked the directorial debut of screenwriter John Kaye, who also penned the original screenplay; the film was backed by Green Moon, the production company founded by leading lady Melanie Griffith.

Steven Bauer
as Lou
View All