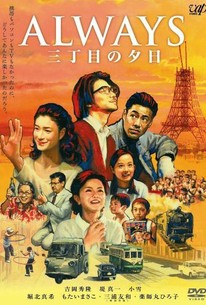 Set in a digitally recreated postwar Tokyo (in 1958), Takashi Yamazaki's Always -- Sunset on Third Street tells the story of a few people who live and work in a rundown neighborhood, and their impact on one another's lives. Mutsuko (Maki Horikita) arrives from the country, awed by the size of Tokyo, and eager to take on her new position working for the president of an automobile company. She's disappointed when she learns the "automobile company" is a small garage run by the struggling but industrious Suzuki (Shin'ichi Tsutsumi of One Missed Call), and he's upset when he learns that the auto mechanic he thought he was hiring is actually a bicycle repairwoman. Soon enough, Mutsuko settles in with Suzuki, his wife (Hiroko Yakushimaru of Princess Raccoon), and their impish little boy, Ippei (Kazuki Koshimizu). Across the street, Chagawa (Hidetaka Yoshioka of The Hidden Blade) runs the candy store, but he's also a frustrated novelist who earns a little money by writing boys' adventure stories. He has a crush on the local pub owner, Hiromi (Koyuki of The Last Samurai), and she uses that to her advantage when she's saddled with Junnosuke (Kenta Suga of Godzilla: Final Wars), the abandoned son of an acquaintance. One night, she convinces the drunk, smitten Chagawa to take the boy in, promising to visit occasionally. She does, and soon the unlikely trio begins to resemble a family themselves. Always -- Sunset on Third Street is based on a popular manga, and was a hit in Japan, winning a number of awards. The film had its North American premiere at the Subway Cinema's 2006 New York Asian Film Festival with director Yamazaki in attendance. ~ Josh Ralske, Rovi

There are no critic reviews yet for Always san-chôme no yûhi (Always - Sunset on Third Street). Keep checking Rotten Tomatoes for updates!

There are no featured audience reviews for Always san-chôme no yûhi (Always - Sunset on Third Street) at this time.