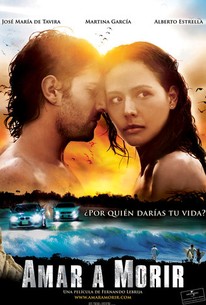 A young man aggressively seeks an escape from his restrictive life -- and finds one in a unique girlfriend -- in this tense romantic thriller from Mexico. As the wealthy, handsome, and intelligent heir to Vizcaino, Inc. -- a banking conglomerate launched by his high-rolling father Ricardo (Sergio Jurado) -- Alejandro Vizcaino (Jose Maria de Tavira) appears to have everything he could want or need. But in truth, Ricardo is thoroughly corrupt and rotten, and controls every single aspect of Alejandro's life and world -- from how he dresses, to what he eats, to who he will marry. Alejandro grows so suffocated from this treatment, and so desperate, that his need to escape propels him into a dangerous drag racing feat, and causes an extreme accident. Shaken but physically unharmed, Alejandro rejects his life in one sudden and swift maneuver by fleeing town. He ends up in an impoverished beachside community, popular among locals for its surfing, and his eyes soon fall on Rosa (Martina Garcia), the most beautiful woman he has ever laid eyes on. By Ricardo's standards, Rosa falls well below Alejandro's social class, but Alejandro doesn't care; he seeks Rosa out and the two fall madly in love with one another. Unfortunately, Rosa lives under the oppressive thumb of a local gangster, El Tigre (Alberto Estrella), which means that Alejandro will be putting his life on the line if he attempts to abscond with his new paramour.

Critic Reviews for Amar a Morir

There are no critic reviews yet for Amar a Morir. Keep checking Rotten Tomatoes for updates!

Audience Reviews for Amar a Morir

There are no featured audience reviews for Amar a Morir at this time.