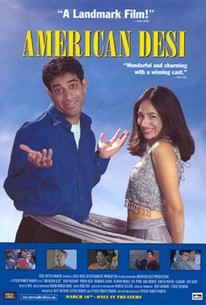 American Desi ends up being rather amateurish and doesn't mine its subject matter as thoroughly as it could.

A feature film debut for Indian director Piyush Dinker Pandya, American Desi centers around Krishna Reddy (Deep Katdare), who calls himself Kris to escape the traditionalism of his Indian family. Desiring to be an all-American type of guy, Kris enters college with good friend Eric (Eric Axen) and begins a new world of freedom away from his protective family. As soon as he arrives on campus, he learns that he has been roomed with three Indian roommates: Jagjit (Ronobir Lahiri), a budding artist, Salim (Rizwan Manji), an old-fashioned believer in Eastern ideals, and Ajay (Kal Penn), who immerses himself in Afrocentric culture. Kris also meets a young student named Nina (Purva Bedi), with whom he falls instantly in love, but fails at first to realize that she too is Indian. An unforeseen opponent, Rakesh (Anil Kumar), threatens to separate the two, with his appreciation of the lifestyles Kris has often rejected in favor of a more American bent. Through his relationship with Nina, Kris begins to get in touch with his heritage, finding that the Western adoptions he has clung to his whole life have prevented him from discovering his true identity.

There are no featured audience reviews for American Desi at this time.