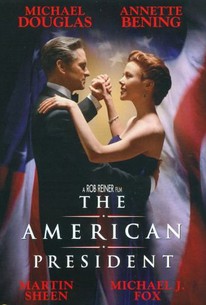 A charming romantic comedy with political bite, Rob Reiner's American President features strong lead performances and some poignant observations of politics and media in the 1990s.

How does the widowed leader of the free world balance his many obligations to his country with the ordinary demands and everyday rites of courtship? When President Andrew Shepherd, quite unexpectedly, falls in love with Sydney Wade, an environmental lobbyist, he must overcome obstacles not faced by average citizens; he must worry that the public's right to know will collide with the desire for personal privacy. He must contend with approval ratings, an inquiring press and an aggressive political opponent just to go on a date. The President's advisors, chief of staff, domestic policy advisor, White House pollster and press secretary help him get through his busy schedule, deal with demands of congress and quell any global predicaments. But political crises are different than personal ones and somehow the American President alone must find a way to balance his love for his country with his love for an incredible woman.

John Mahon
as Chairman of the Joint Chiefs

Kurt A. Boesen
as Security Advisor

Aaron Sorkin
as Aide in Bar

News & Interviews for The American President

Critic Reviews for The American President

Audience Reviews for The American President