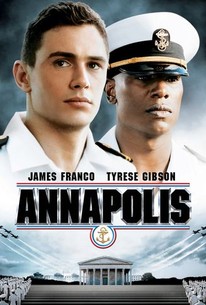 Stocked with leading men who look the part but lacking an iota of original plot, Annapolis is merely a watery shadow of superior seafaring military dramas.

A poor but ambitious young man strives to make good in one of the most competitive institutions on Earth in this military drama. Jake Huard (James Franco) is a young man from a small Maryland town who grew up in a blue-collar family with few opportunities. Wanting to make something of himself after completing high school, Jake set his sights on attending the United States Naval Academy in Annapolis, where he narrowly makes the cut and becomes one of the 1,200 applicants selected for the freshman class. Jake finds that life as a "plebe" is intellectually challenging and physically punishing, and he soon develops a powerful adversary in Midshipman Lt. Cole (Tyrese Gibson), his training commander, who pushes Jake to the limit to see if he has what it takes. Standing on the razor's edge of failing as both a student and a soldier, Jake makes a brave but dangerous gesture toward proving himself by entering the Brigade Championships, a Naval boxing competition where he'll go into the ring against the best fighters in the Navy -- including Lt. Cole. Jake soon has one person on his side when he strikes up a friendship with Ali (Jordana Brewster), a pretty young officer who believes Jake has what it takes to go the distance. Annapolis also stars Donnie Wahlberg, Chi McBride, and Vicellous Shannon; the film was directed by Justin Lin, who debuted with the acclaimed independent feature Better Luck Tomorrow.

24 Stars Who Dominated the Boxing Ring
Best and Worst Movies of the Furious 7 Stars
Jordana Brewster is the New "Mrs. Smith"
View All