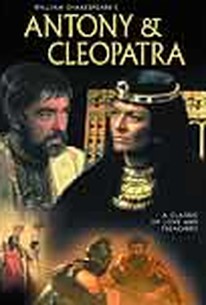 Like other productions of Antony and Cleopatra, this 1974 version assumes that the audience is familiar with events that took place before Mark Antony's affair in Egypt with Cleopatra. These events include the assassination of Julius Caesar and the formation of a ruling Roman triumvirate of Mark Antony, Octavius Caesar and Marcus Aemilius Lepidus. When the armies of the triumvirate track down the armies of the assassins during a civil war, Egypt refuses to participate on the triumvirate's side. Antony summons Queen Cleopatra to Tarsus, Cicilia (present-day Turkey), to explain Egypt's position. But Antony falls in love with her and returns with her to Alexandria, Egypt. Shakespeare's play -- and thus the film -- begins there, in Alexandria. Captivated by Cleopatra's (Janet Suzman) beauty and charm, Antony (Richard Johnson) dallies in Egypt, forgetting his duties as soldier and statesman, until he receives word that his wife, Fulvia, has died and that Rome is on the brink of a new civil war, this time against Sextus Pompeius, the son of the late Pompey the Great. After Antony returns to Rome, Octavius (Corin Redgrave) berates him for neglecting affairs of state. However, they reconcile after Antony agrees to marry Octavius' sister, Octavia (Mary Rutherford). Upon hearing of the marriage, Cleopatra becomes enraged. Meanwhile, the triumvirs -- Antony, Octavius, and Lepidus make peace with Pompeius. Then Antony, accompanied by his new wife, goes to Athens to take command of Roman armies fighting the Parthians. Taking advantage of Antony's absence, the ambitious Octavius defeats Pompeius in a new war, deposes Lepidus, and consolidates his power. Angry, Antony sends his wife, Octavia, to Rome to protest. Meanwhile, still in love with Cleopatra, Antony returns to Egypt and resumes his affair with the alluring queen. ~ Mike Cummings, Rovi

Critic Reviews for Antony and Cleopatra

There are no critic reviews yet for Antony and Cleopatra. Keep checking Rotten Tomatoes for updates!

Audience Reviews for Antony and Cleopatra

There are no featured audience reviews for Antony and Cleopatra at this time.