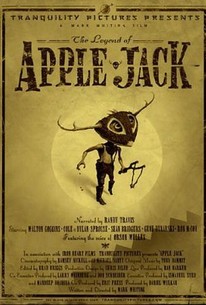 Mark Whiting's short feature The Legend of Apple Jack opens on October 30, 1938, when Les (Sean Bridgers) and Moe Danyou (Walton Goggins) escape from prison and hightail it to California during the Orson Welles broadcast of "War of the Worlds." Meanwhile, father-and-son Sherman Pyne (Ron McCoy) and Jack Pyne (played by twins Cole and Dylan Sprouse) are enjoying a backyard barbecue while their octogenarian neighbor, Helmut Jitters (Gene Dynarski), gets ready to fight the incoming extraterrestrials he's heard about on the radio. Country singer Randy Travis narrates; rock act Toby Dammit provides the soundtrack.

There are no critic reviews yet for Apple Jack. Keep checking Rotten Tomatoes for updates!

There are no featured audience reviews for Apple Jack at this time.