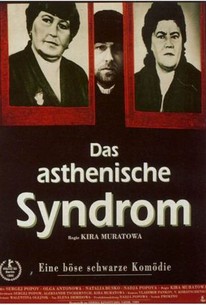 Some films and filmmakers don't budge an inch from their artistic visions, regardless of whether they are easy for the viewer to understand or tolerate, and (in this case) regardless of the inevitable disapproval of the state censors. Award-winning Russian director Kira Muratova has put together such a grimly comic film here, in two segments - one of them black and white. In the opening (black and white) segment, a woman doctor, is coping very badly with the recent death of her husband; she refuses to treat one of her patients and later goes out on the streets and picks up a drunk and takes him home with her for sex. In the next segment, a film school teacher asks his students what they thought of the previous segment. Interspersed with the student's characteristically self-serving and uninsightful answers are moments of bleak beauty, as when a lonely overweight woman, totally ignored by her son, plays a moving solo of "Strangers In The Night" on the trumpet. A segment which caused this feature to be kept from circulation for some time is a short, enigmatic screen monologue which contains an unusual amount of profanity. ~ Clarke Fountain, Rovi

There are no critic reviews yet for The Asthenic Syndrome (Astenicheskiy sindrom). Keep checking Rotten Tomatoes for updates!

There are no featured audience reviews for The Asthenic Syndrome (Astenicheskiy sindrom) at this time.