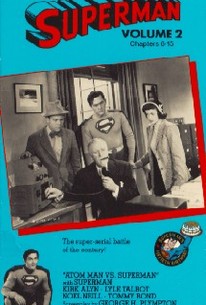 The second of Columbia's Superman serials, the 15-episode Atom Man Vs. Superman stars Kirk Alyn in the dual role of Clark Kent and the "Man of Steel." This time, Kent/Superman is pitted against bald-pated Lex Luthor (Lyle Talbot), who, disguised as Atom Man, threatens to devastate Metropolis with any number of devilish devices-the deadliest of which is a disintegration machine. Luthor tumbles onto Superman's Achilles' heel: Kryptonite. Once our hero has been exposed to this fatal ore, Metropolis becomes a wide-open town for criminals of all varieties. But Superman regains his full powers in time to stop Luthor from laying waste to Metropolis with his latest demon machine, a sonic vibrator. Also appearing in Atom Man vs. Superman are Noel Neill as Lois Lane, Tommy Bond (the onetime "Butch" of The Little Rascals) as Jimmy Olson, and Pierre Watkin as Perry White. The serial is energetic enough, but the flying scenes (crudely conveyed via animation) are rather laughable.

George Robotham
as Earl
View All

There are no critic reviews yet for Atom Man vs. Superman. Keep checking Rotten Tomatoes for updates!

There are no featured audience reviews for Atom Man vs. Superman at this time.