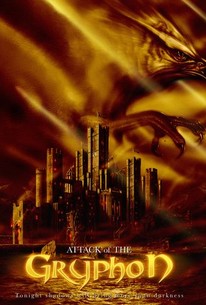 Attack of the Gryphon

Centuries after being split apart by a royal feud, two disparate kingdoms reunite to do battle against a powerful Gryphon and the malevolent sorcerer who controls the mythical beast. Once upon a time, brothers Delphus and Lock presided over the kingdom of Vallon in peace. A thunderous rivalry subsequently tore the princely pair apart, however, and with them, the kingdom as well. Now what was once the serine kingdom of Vallon has become fragmented into two warring territories known as Delphi and Lockland. These days it appears as if Delphi has gained the upper hand in the perpetual battle, and as the citizens of Lockland prepare to face their ultimate demise the desperate King orders his Sorcerer to summon the Gryphon and destroy their enemies. Though at first it appears as if his plan was a success, Lockland is soon forced to contend with an even greater force when the power-mad sorcerer seeks to take control of both kingdoms by commanding the powerful beast to turn on Lockland as well. Left with no other choice than to fight as one or be destroyed as one, the citizens of Delphi and Lockland seek to end the sorcerer's tyrannical reign by putting the past to rest and coming together to destroy the beast and defeat the man who controls it.

Nicolae Stoica
as Messenger
View All

Critic Reviews for Attack of the Gryphon

There are no critic reviews yet for Attack of the Gryphon. Keep checking Rotten Tomatoes for updates!

Audience Reviews for Attack of the Gryphon

There are no featured audience reviews for Attack of the Gryphon at this time.

Attack of the Gryphon Quotes