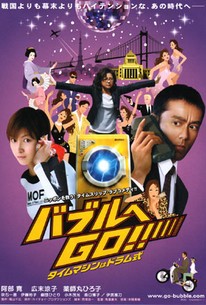 Director Yasuo Baba and screenwriter Ryoichi Kimizuka team to tell the satirical tale of a young bar hostess sent back in time to the year 1990 on a mission to save her mother and reverse a disastrous financial policy that threatens to plunge the Japanese economy into debt. Adapted from the popular manga of the same name, Bubble Fiction: Boom or Bust opens as bar hostess Mayumi Showa (Ryoko Hirosue) is abandoned by her boyfriend shortly after the death of her mother and plunged into bottomless debt. Later followed to her apartment by Finance Ministry salary-man Shimokawaji (Hiroshi Abe), Mayumi is informed by Shimokawaji that her mother is not dead, but trapped in a different decade on a government-sponsored mission. It seems that the powers that be have created a working time machine out of a common washing machine, and that Mayumi's mother Mariko was sent to ensure that 1990-era Finance Minister Serizawa (Kazue Fukiishi) never establishes the policy that will ultimately cripple the Japanese economy. Should Mayumi succeed in her mission, all of her personal debts will be forgiven. ~ Jason Buchanan, Rovi