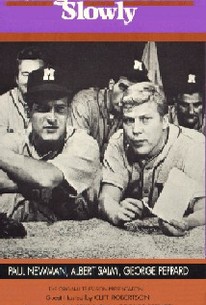 First published in early 1956, Mark Harris's baseball novel Bang the Drum Slowly was swiftly adapted for television; on September 24, 1956, a streamlined 60-minute version of the Harris novel was telecast live on The US Steel Hour. Paul Newman plays Henry Wiggen, a slang-happy, unabashedly self-promotional pitcher for the fictional New York Mammoths. Wiggen spends a great deal of his free time protecting his dimwitted roomate, catcher Bruce Pearson (Albert Salmi), from being dropped from the team. It's not that Henry is overly fond of Bruce; it's simply that he knows (but the rest of the team doesn't) that Bruce is dying of Hodgkin's disease. This TV adaptation remains faithful to the first-person singular style of the novel by having Henry periodically step "out" of the drama to address the audience: this device is most effective at the finale when, after tearfully recalling the "ragging" he often gave his now-deceased teammate, Henry sobs "From here on, I rag nobody." A very young George Peppard appears as Piney Woods, the country-boy ballplayer who sings the ballad from which the drama's title is derived. A kinescoped version of Bang the Drum Slowly was included in the 1981 PBS anthology The Golden Age of Television. Harris' novel was later adapted into a 1973 theatrical feature, starring Michael Moriarty as Henry and Robert De Niro as the "doom-ded" Bruce.

There are no critic reviews yet for Bang the Drum Slowly. Keep checking Rotten Tomatoes for updates!

There are no featured audience reviews for Bang the Drum Slowly at this time.