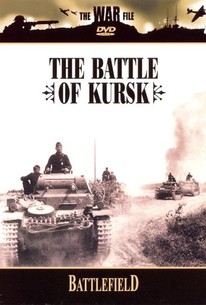 Within the context of World War II, the Battle of Kursk marked a decisive turning point against the Axis Powers. Fought during the summer of 1943, the conflict witnessed an estimated two million men and six thousand tanks from the combined German and Soviet armies going head to head. This alone qualified the skirmish as the largest tank battle on record. The historical significance of the battle cannot be overstated; given the Nazis' defeat at Kursk, this battle - coupled with the Russian triumph at the Battle of Stalingrad - shifted the tide against the Axis and enabled the Allies to win the war. The documentary program War File: Battlefield - The Battle of Kursk (an episode of the Battlefield television series) revisits this battle via key archival footage that includes biographical profiles of the men involved, discussions of weaponry, the basic stage-by-stage narrative of the battle and key insights into the military strategies involved.

There are no critic reviews yet for Battlefield. Keep checking Rotten Tomatoes for updates!

There are no featured audience reviews for Battlefield at this time.