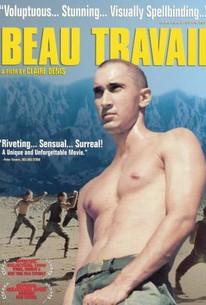 In this military drama, a military man finds his position of prominence questioned when a new recruit wins the commander's favor. Galoup (Denis Lavant) is an officer at a French Foreign Legion outpost in the Gulf of Dijbouti, where he enjoys a close relationship with the Commanding Officer (Michel Subor) and works with a team of fit young men who work hard all day and play hard all night. When Sentain (Gregoire Colin), a new recruit, joins the troops, Galoup believes that it upsets the delicate balance between the C.O. and the other men. Sentain is well-liked by his comrades for his good humor and selfless nature, and his virtues make him the C.O.'s new favorite. Galoup is jealous of the attention Sentain receives, and he devises a plan to discredit Sentain in the eyes of the other men and have him drummed out of the service. Galoup's plot is found out, however, and Galoup is stripped of his rank and sent home. Beau Travail was loosely based on Billy Budd, Sailor by Herman Melville, though disco dancing did not figure quite as prominently in Melville's novella. ~ Mark Deming, Rovi

Abdlekander Bouti
as Legionnaire
View All