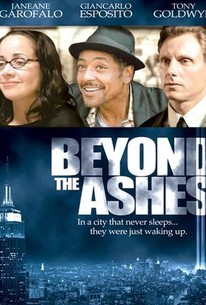 Beyond the Ashes Ratings & Reviews Explanation

Beyond the Ashes Photos

A handful of New Yorkers struggle to tie together the loose ends of their lives following the terrorist attacks of September 11, 2001, in this drama. It has been several weeks since the twin towers of the World Trade Center fell, and Liz (Janeane Garofalo), a writer who watched as one of the jets sailed past her window and into the skyscraper, has refused to leave her apartment since the disaster. However, an eccentric but street-smart poet named Karl (Giancarlo Esposito) carries a torch for Liz and is determined to bring her back to the land of the living. Judy (Nicole Hansen) suffers through an unpleasant one-night stand with Billy (Dov Davidoff) before waking up in the apartment of Punch (Tony Spiridakis), a fellow lost soul whose car is covered with the dust left by the falling towers...only now, some of his neighbors claim they can see a holy apparition in the dirt, so it's hard for him to move. And Samantha (Jennifer Carpenter), who has been observing the neighborhood from behind the bar at a local watering hole, finds some much-needed comfort in the arms of renegade would-be rock singer Gina Mascara (Pauley Perrette). Screened at film festivals as Ash Tuesday, Beyond the Ashes was written by Tony Spiridakis, who also plays Punch.

Jennifer Carpenter
as Samantha
View All

Critic Reviews for Beyond the Ashes

There are no critic reviews yet for Beyond the Ashes. Keep checking Rotten Tomatoes for updates!

Audience Reviews for Beyond the Ashes

There are no featured audience reviews for Beyond the Ashes at this time.

Beyond the Ashes Quotes