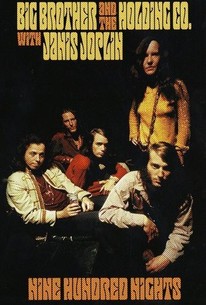 Big Brother & the Holding Company was one of the first major bands to emerge from the nascent psychedelic music scene in San Francisco, CA, in the mid-'60s. Conjuring up a high-powered blend of blues and folk, the band had already begun to gain a significant local following when the group's manager, Chet Helms, introduced them to a young woman from Texas who was looking for a gig -- Janis Joplin. After Joplin joined the band, Big Brother & the Holding Company became major stars, and their album Cheap Thrills became one of the touchstones of the early San Francisco sound, but Joplin's presence proved to be both a blessing and a curse. Her powerful vocals on tunes like "Piece of My Heart" and "Ball and Chain" helped make the group a hit, but once the music press singled out Joplin as the star of the show, the bandmembers soon found themselves in the shadow of their singer, even after she left the band to go solo. Big Brother and the Holding Company With Janis Joplin: Nine Hundred Nights is a documentary which examines the group's rise and fall, featuring interviews with the surviving members of the band and rare footage of the group on-stage, including performances of "Piece of my Heart," "Combination of the Two," "Ball and Chain," "Down on Me," "Light Is Faster Than Sound," and more. Rip Torn narrates.

There are no featured audience reviews for Big Brother and the Holding Co. With Janis Joplin: Nine Hundred Nights at this time.