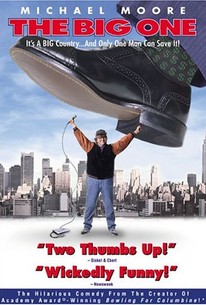 The Big One Ratings & Reviews Explanation

The Big One Photos

Grass-roots guerilla documentarian Michael Moore (Roger and Me) takes on corporate America and the horrific effects of downsizing in this subversive and satirical effort. Ostensibly, the film is a chronicle of Moore's cross-country promotional tour for his book Downsize This!, a castigation of the corporate bottom-line mentality that is destroying the livelihoods of countless Americans and exploiting laborers in Third World nations. Though generally surrounded by a small army of press, Moore and his own tiny film crew escape to drop in on the CEOs of several major companies. Highlights (or perhaps lowlights considering their context) include a visit to the Leaf Candy company's Payday candy-bar plant in Centralia, Illinois. Company executives are planning to shut it down, not because the plant is unproductive, but because the workers are too efficient! The big wigs figure they will do better to reopen a new plant in a foreign country to cut production costs. They care nothing for the economic devastation faced by Centralia residents. Moore also interviews Phil Knight, the CEO of Nike, in a chilling interview in which Moore tries to get Knight to acknowledge the immorality of exploiting cheap foreign labor in sweatshops to make sneakers. In another segment, Moore shows how TWA Airlines routinely employs prison inmates (rather than more expensive unemployed honest people) in California, some of them convicted killers, on their 1-800 information numbers. In between segments, Moore offers angry/funny insights on the state of things. Cameo appearances include Garrison Keillor and Studs Terkel.

Michael Moore
as Himself

Studs Terkel
as Himself

Critic Reviews for The Big One

Audience Reviews for The Big One

The Big One Quotes