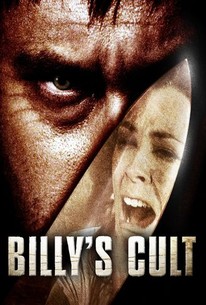 BILLYS CULT takes us into the demented mind of Billy (Donovan Kern), a ruthless killer unlike any other seen before. Born out of sin, Billy is given up at a young age for adoption by his mother Lenore Kingsley (Susan Campanaro). He grows up wanting revenge on his mother, and biological father, a Roman Catholic priest, Father Allen Perry (Anthony Grasso). Meanwhile, Detectives Gates (Lou Martini Jr.) and Steele (Debbie Rochon) are in pursuit of this killer, trying to put an end to the killing spree, while at the same time, attempting to exorcise their own inner demons. Billy is a demonic soul that channels his hatred straight from the devil. He uses his butcher shop to carve his kills and dispose of their remains. As more bodies are discovered throughout Southern New Jersey, Detective Gates and Detective Steele try to solve the mystery. Anyone that gets in Billy's way is brutally murdered. Even though the state police think they have solved crime, the murders continue and it is soon realized, that there is much more to these killings. Nobody is safe from Billy's wrath, not even the detectives themselves. The Cult following shall commence.

There are no critic reviews yet for Billy's Cult. Keep checking Rotten Tomatoes for updates!

There are no featured audience reviews for Billy's Cult at this time.