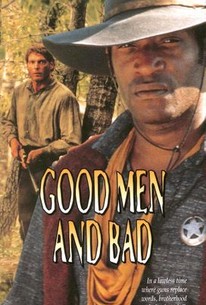 In this made-for-TV Western, the third and last in the Black Fox series, America is gripped by racial tension following the end of the Civil War and the assassination of Abraham Lincoln, with Texas as no exception. A man goes on a warpath in search of the men who murdered his wife, while a former slave tries to find a safe haven from racist violence with the help of a childhood friend, whose parents owned the plantation where he and his family once worked. Good Men and Bad (also shown as Black Fox: Good Men and Bad) stars Christopher Reeve, Tony Todd, and Kim Coates.

There are no critic reviews yet for Black Fox: Good Men and Bad. Keep checking Rotten Tomatoes for updates!

There are no featured audience reviews for Black Fox: Good Men and Bad at this time.