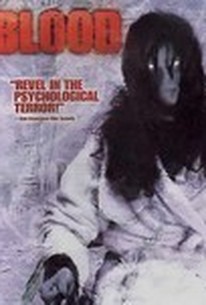 Director Charly Cantor's offbeat British vampire tale concerns a synthetic woman (Lee Blakemore from the Rula Lenska vehicle Paradise Grove) whose blood is a heroin-like drug with powerful effects on those who drink it; however, she must replace every unit of blood she loses with nine units from human veins. Adrian Rawlins (Breaking the Waves) stars as the scientist who created Blakemore for "Project Elixir," and soon finds himself dangerously walking the line between love and narcotic addiction. Phil Cornwell, Nicolas Harvey, and Paul Herzberg co-star. Cantor also made the wistful ghost story Furnished Room. ~ Robert Firsching, Rovi

There are no critic reviews yet for Blood. Keep checking Rotten Tomatoes for updates!

There are no featured audience reviews for Blood at this time.