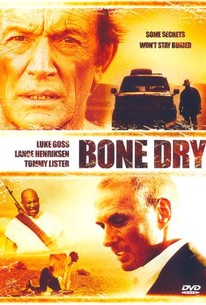 Luke Goss and Lance Henrikson star in first time writer/producer/director Brett A. Hart's unforgiving tale of a vengeance pitting a mysterious man with a dark past against a sadistic tormentor intent on pushing his prey to the limits of human endurance. Eddie (Goss) is a family man who had just pulled off the highway for a quick cup of coffee when he was confronted by master manipulator Jimmy (Henrikson). Armed with a high-powered sniper rifle and a pair of walkie-talkies, Jimmy will now force Eddie to take the longest walk of his life. The setting is the Mojave Desert, and Eddie must walk north. Should Eddie turn in any other direction, Jimmy will put a bullet in his brain without hesitation. But this is no ordinary stroll in the sand, because along the way Eddie will be confronted with a series of ambushes and traps designed to wear away at both his dehydrated flesh and increasingly fragile psyche. Later, as the pair confront one another at their final destination - an open grave - it becomes painfully obvious that the men who once seemed polar opposites share more in common than appearances may suggest.

Julia Self
as Connie

Hudson Thames
as Son
View All