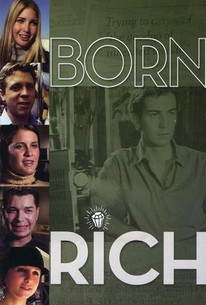 The heir to the Johnson & Johnson company empire, 20-year-old N.Y.U. student Jamie Johnson makes his directorial debut with the documentary Born Rich. Armed with economic power and the celebrity access of his own social privilege, Johnson is able to gather together ten wealthy friends to talk about money. Some of the richest young people in America discuss the realities of growing up with huge financial assets, ideas for what to do with it, and feelings about losing it. The son of a gaming industry giant, Luke Weil reveals his feelings about going to boarding school, while Ivanka Trump talks about her experiences as the daughter of Donald and Ivana. Also features discussions with the young heirs to the Bloomberg, Newhouse, and Whitney fortunes. Before it premiered at the 2003 Sundance Film Festival, participant Weil sued Johnson in hopes of stopping the film's release.

There are no critic reviews yet for Born Rich. Keep checking Rotten Tomatoes for updates!

There are no featured audience reviews for Born Rich at this time.