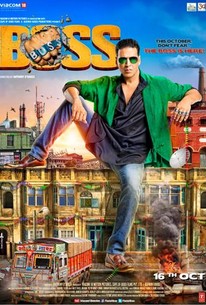 BOSS is just as colorful as his actions. He travels with a massive entourage of trucks that follow him. He has his personal cheerleaders who 'cheer' him during his endeavors. He has a penchant for playing loud music when he's beating up the bad guys. That's BOSS. When his father approaches him for help, BOSS leaves everything aside and makes his family his first priority. Now BOSS will travel to Delhi to accomplish his mission. His adversaries are powerful people with top connections. But BOSS is a one-man-army. He will demolish everything that comes in the way of his family - be it a dangerous cop or a corrupt Minister. However, he will take his revenge in his own way. There will be loads of action, loads of fun and loads of excitement in this entire journey. The journey that will lead to the ultimate combat in the historic war ground of Kurukshetra where once again, after centuries, good and evil will battle one another. And once again, evil will be vanquished from the face of the Earth. But this time, it will all be - BOSS style. (c) Krian

Sonakshi Sinha
as Dancer - Party all Night
View All

There are no featured audience reviews for Boss at this time.