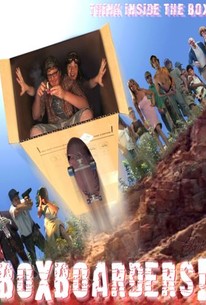 A lazy day lounging under the California sun turns into a cash windfall for two high school surfers who create a new sport that starts to spread like wildfire. Bored teens Ty Neptune and James James were just attempting to have a bit of fun when they spotted a refrigerator box in a dumpster, slapped some wheels on it, and ventured out to take their new creation for a test drive. The result is a new sport called Boxboarding, and it isn't long before a local news crew arrives on the scene and word of this quirky new sport begins to spread. Before long, the boys are celebrities in their high school and the hilly streets of Laguna Beach are filled with aspiring Boxboarders. But of course where there's fame competition is sure to follow, and a scheming rich kid Alexander Keene attempts to organize a "winner takes all" event in which the best Boxboarder secures all the rights to this popular new sport. While folks like Ty and James are in it purely for fun, others like stuck-up hanger-on Tara are just trying to cash in on the Boxboarding craze and get a little exposure on MTV.

There are no featured audience reviews for Boxboarders! at this time.