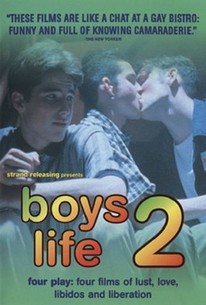 Like its predecessor Boys Life, Boys Life 2 compiles several short films that deal with gay issues both seriously and comically. "Must Be the Music" follows four teenagers, three of whom are gay, as they spend a night looking for something to do in Los Angeles and end up at a dance club. "Nunzio's Second Cousin" stars Vincent D'Onofrio as Sgt. Tony Randozzy, a gay Chicago police detective who enacts a very special revenge on Jimmy (Miles Perlich), a young man he picks up on a gay-bashing charge: at gunpoint, he forces Jimmy to have dinner with him and his mother (Eileen Brennan) as his date for the evening. "Alkali, Iowa" concerns Jack (J.D. Cerna), a gay teenager coming of age in a farming community. Growing up with a dead war-hero father, a mother (Mary Beth Hurt) who is emotionally distant, and as the only openly gay man in the community, Jack isn't sure how to feel about his sexuality, until he finds a stack of beefcake magazines that belonged to his dad. And "Trevor" (which won a 1995 Oscar for Best Short Subject) tells the tale of Trevor (Brett Barsky), a stocky and uncoordinated young gay man with two obsessions: the music of Diana Ross and Pinky (Jonah Rooney), a good-looking boy in his class.

Michael Saucedo
as Eric [Must Be the Music]

Justin Urich
as Kevin [Must Be the Music]

Travis Sher
as Dave [Must Be the Music]

Milo Ventimiglia
as Jason [Must Be the Music]

Germane Montel
as Eric's Friend/Lead Dancer [Must Be the Music]

Gabriel Fuller
as Kissing Boy #1 [Must Be the Music]

Ryan Vernotico
as Kissing Boy #2 [Must Be the Music]

Grant Swanson
as Matt [Must Be the Music]

Eddie Mui
as Gregg [Must Be the Music]

Jason Adelman
as Michael [Must Be the Music]

David Ko
as Michael's Friend [Must Be the Music]

Chris Fuentes
as D.J. [Must Be the Music]

Peter Maloney
as Senior [The DadShuttle]

Matt McGrath
as Junior [The DadShuttle]
View All

There are no featured audience reviews for Boys Life 2 at this time.