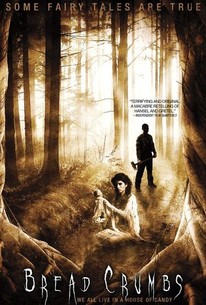 A shocking new twist on the familiar tale of Hansel and Gretel, Breadcrumbs finds a group of shady filmmakers falling prey to a murderous assailant while shooting an adult film at a remote cottage. Angie thought she had left her sordid past behind when a sleazy producer talked her into making one last movie. But as the cast and crew wind their way through a dense woods in search of their destination, they happen across Henry and Patti, two mysterious young siblings who seem to simply live amongst the trees. Later, after the group reaches the cabin and the cameras start to roll, they come under attack from a psychotic killer. Terrified after witnessing a cold blooded killing, lead actor Billy holds Patti hostage in hopes of warding off the unseen predator. But that only serves to enrage their murderous stalker and before long Henri, Patti, and Angie are the only ones left standing. Will Angie make it out of her final shoot alive, or was this always destined to be her bloody swan song? ~ Jason Buchanan, Rovi

Jonathan Whitcup
as Woodsman
View All

There are no critic reviews yet for BreadCrumbs. Keep checking Rotten Tomatoes for updates!

There are no featured audience reviews for BreadCrumbs at this time.