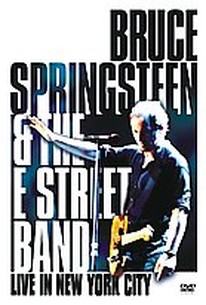 In 1999, Bruce Springsteen reunited with his beloved E Street Band and took off on a mammoth worldwide tour that featured rare performances of gems from his entire career, ending with a triumphant 10-night stand in New York City's Madison Square Garden. This fabulously shot concert film captures songs from the brilliant final two nights, June 29 and July 1, 2000, in which Bruce and the E Streeters pulled out all the stops, tearing up the Garden with exhilarating versions of such old stand-bys as "Prove It All Night" and "Born to Run" as well as such rarer numbers as "My Love Will Not Let You Down."The show was organized around a killer song cycle of "Youngstown"/"Murder Incorporated"/"Badlands"/"Out in the Street"/and "Tenth Avenue Freeze-Out." On this collection those songs are followed by the wonderful new "Land of Hope and Dreams," which closed the show virtually every night, a powerful, optimistic song that would end with Bruce pogo-ing wildly, and a defiant "American Skin," the controversial song Bruce wrote about the Amadou Diallo shooting (and people's safety in general) that led some of New York's Finest to boycott the shows.

There are no critic reviews yet for Bruce Springsteen & the E Street Band - Live in New York City. Keep checking Rotten Tomatoes for updates!

There are no featured audience reviews for Bruce Springsteen & the E Street Band - Live in New York City at this time.