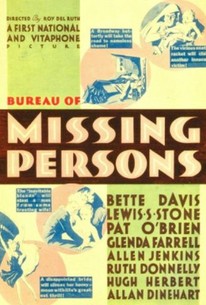 Although claiming to be based on actual cases, this mild crime drama appears to have been derived more from a screenwriter's manual than a police blotter. Newly transferred from robbery to missing persons, glib Butch Saunders (Pat O'Brien) is like the proverbial bull in a china shop at first, but quickly gets the hang of things. In walks pretty Norma Roberts (Bette Davis), claiming to be missing her new husband, whom she accuses of shipping out. Despite being married to nagging Belle (Glenda Farrell), Butch falls in love with the dame, until, that is, he learns the truth. Norma's last name isn't Roberts at all, but Williams, and she is wanted in Chicago for the murder of her boss, Therme Roberts. Begging Butch to cover for her -- "just for a little while. I'll explain everything later" -- Norma does a disappearing act herself and makes it look like suicide. But Butch refuses to buy the act and with the help of his boss, Captain Webb (Lewis Stone), the fast-talking cop arranges for a corpse to be lying in state at a local funeral parlor under the name of Norma Williams, hoping to flush out the real Norma. Norma walks right into the trap with another cockamamie story at the ready. But this time, it may just be the truth and Butch becomes determined to clear the lady of murder.

There are no featured audience reviews for Bureau of Missing Persons at this time.