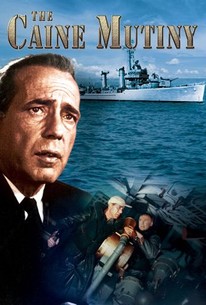 Humphrey Bogart is superb as a domineering captain with brittle composure in The Caine Mutiny, an inquisitive courtroom drama teeming with memorable performances.

Herman Wouk's Pulitzer Prize-winning novel The Caine Mutiny was the source of both a play and a film. The play, also written by Wouk, concentrates only on the court-martial which provides one of the story's many climaxes. The film attempts to telescope the entire book into two hours, and does an admirable job, despite the censorial measures taken to insure cooperation from the US Navy. The central character is Ensign Willie Keith (Robert Francis), who in the early months of World War II is assigned to the Caine, a battered minesweeper. Dismayed by the slovenliness of the crew and the seemingly lackadaisical attitude of Captain DeVries (Tom Tully), Keith is delighted when DeVries is replaced by "All Navy" Captain Phillip Francis Queeg (Humphrey Bogart). A strict disciplinarian, Queeg rapidly whips the Caine into shape. Unfortunately, he's been in combat far too long, and is nearing the end of his tether. Increasingly paranoid, Queeg makes foolish mistakes at sea while misdirecting his attention towards such details as untucked shirts and unworn hats. Lt. Keefer (Fred MacMurray), one of Queeg's officers, rails against the captain's erratic behavior to his fellow officers. He convinces Lt. Maryk (Van Johnson) that Queeg is a danger to himself and his men, and that Maryk should consider usurping Queeg's authority. During a storm at sea, the beleaguered Queeg panics, and Maryk, acting upon Keefer's suggestion, stages a mutiny and assumes command, with Keith standing by Maryk's decision. A court-martial follows, with Navy attorney Lt. Barney Greenwald (Jose Ferrer) reluctantly defending Maryk and Keith. During the testimony, Keefer, who has managed to avoid any tangible connection with the mutiny, lies about his complicity. Greenwald's only hope at this point is to discredit Queeg--which he does by bringing up an incident wherein the obsessive Queeg forced his officers to conduct an extensive search for some missing strawberries. Queeg cracks under questioning, and the defendants are cleared. At a victory celebration, a drunken Greenwald rails against the "summer sailors" who ruined an essentially courageous but worn-out man like Queeg, ending his tirade by throwing a glass of champagne in the treacherous Keefer's face. Major changes in transferring the novel to the screen included Greenwald's curtain speech, which originally brought up the lawyer's Jewish heritage; also, the novel's Captain Queeg is not forcibly retired after his breakdown, but instead transferred to stateside duty, where the press lauds him as a hero! Humphrey Bogart delivers one of his most memorable (and most often imitated) performances as the neurotic Queeg, though playgoers with long memories insist that Lloyd Nolan, who played Queeg on Broadway, gave a far more powerful accounting of this complex role.

May Wynn
as May Wynn

Donald Dillaway
as Chauffeur
View All

Critic Reviews for The Caine Mutiny

Audience Reviews for The Caine Mutiny