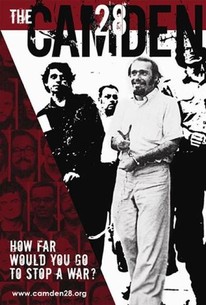 Despite the fact the events chronicled in The Camden 28 occurred 30 years ago, this poignant and compassionate doc about Vietnam protesters is both powerful and timely.

Filmmaker Anthony Giacchino explores the remarkable story of 28 anti-war activists who protested the Vietnam War by conspiring to break into a draft-board office in Camden, NJ, and destroy government draft records identifying young men available for military service. On Sunday, August 22, 1971, FBI Director J. Edgar Hoover and Attorney General John Mitchell announced that 20 anti-war activists had been arrested in and around a Camden draft-board office. Just five days later, the indictment of those 20 individuals -- as well as eight more who were accused of being involved in the incident -- was made public by Mitchell. Charged with conspiracy to remove and destroy files from the draft board, FBI office, and Army Intelligence office, many of the indicted faced up to 47 years in a federal prison if convicted. While the accused referred to themselves as "America's Conscience," the government dubbed them the Camden 28. Many were surprised to hear that all but one of the accused were prominent religious figures -- including four Catholic priests, a Lutheran minister, and 22 Catholic laypeople. All involved claimed that killing was morally indefensible, even in war. Over the course of the next two months, the defense would present its case and many of the defendants would passionately plead their case. In this documentary, filmmaker Giacchino explores the friendships and betrayals that played out as the controversial case of the Camden 28 went before a jury during a time when the country was divided by a war that seemed without end.

News & Interviews for The Camden 28

Critic Reviews for The Camden 28

Audience Reviews for The Camden 28