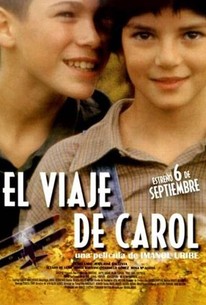 Spanish director Imanol Uribe examines social upheaval as it relates to a young prepubescent's life in his 2002 coming-of-age tale Carol's Journey. Twelve-year-old Carol (Clara Lago) is accompanying her mother Aurora (Maria Barranco) to Spain to visit her mother's native village as the Civil War is tearing the nation apart. Carol's life is an emotional roller coaster, as her American-born father -- with whom she is extremely close -- has been away for quite some time, serving as a pilot in the International Brigades. Furthermore, Aurora recently received a terminal diagnosis for the illness she has been battling and could die at any moment. As Carol struggles with these issues as well as the acceptance of the new environment she has been cast into, she gains perspective from her gentle grandfather Amalio (Alvaro de Luna) and the village teacher Maruja (Rosa Maria Sarda), as well as an unexpected first love with local boy Tomiche (Juan Jose Ballesta). Adapted from Angel Garcia Roldan's novel A boca de noche, Carol's Journey was an official selection to the 2002 Montreal World Film Festival.

Luisber Santiago
as Alvaro
View All