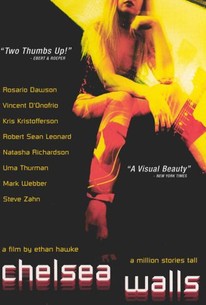 The meandering Chelsea Walls is more pretentious than poetic.

Actor Ethan Hawke takes the director's chair for a test drive with this independent feature, based on a play by Nicole Burdette, in which a number of creative types living in New York's famed bohemian enclave the Chelsea Hotel struggle with their muses as well as their personal concerns. Middle-aged novelist Bud (Kris Kristofferson) is having problems with his latest project, as well as his appetite for alcohol, while he juggles two relationships -- with his wife Greta (Tuesday Weld) and his lover Mary (Natasha Richardson). Audrey (Rosario Dawson) is a poet who is attracted to Val (Mark Webber), but Val has a hard time staying away from drugs, and his pal Crutches (Kevin Corrigan) is doing nothing to help. Grace (Uma Thurman) is trying to make a name for herself as a poet, but in the meantime she supports herself waiting tables; she's developed a crush on her neighbor Frank (Vincent D'Onofrio), but she can't figure out how to get him to pay attention to her. And Ross (Steve Zahn) and Terry (Robert Sean Leonard) are a pair of would-be rock stars who have just arrived in New York from the Midwest, wondering how to get noticed as they try to pick up women. Jeff Tweedy from the acclaimed rock band Wilco composed the film's musical score, while legendary jazz vocalist Jimmy Scott appears in a nightclub scene.

Isaac Hayes
as Man in Elevator

Mark Strand
as Journalist
View All