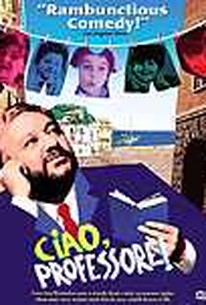 Lina Wertmuller's Ciao Professore was released in Italy as Il Speriamo che me la Cavo. Paolo Villago plays an urbane, supercillious schoolteacher who hopes to be assigned to an upper-crust district. Instead, a bureaucratic snafu ships Villago to the impoverished town of Corzano. Of the fifteen third-graders in his class, only three show up on the first day of school. Fortified with condescention and disgust, Villago personally sets out to collect his deliquent students. He discovers that most of them are absent because they're forced on a daily basis to hustle for their very survival; in some instances, the kids are their familys' sole support. Villago not only develops a stronger understanding and bond with the children, but he also ends up adopting their street smarts in a moment of crisis. Based on Me, Let's Hope I Make It, a collection of essays written by Neapolitan street kids and edited by Marcello D'Orta, the location-filmed Ciao Professore is one of Lina Wertmuller's most benign and life-affirming efforts. Enhancing its appeal is the use of non-professionals for most of the secondary roles. ~ Hal Erickson, Rovi

Isa Danieli
as The principal

Esterina Carloni
as Esterina
View All

There are no featured audience reviews for Ciao, Professore! (Io speriamo che me la cavo) at this time.