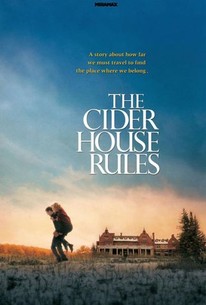 The Cider House Rules has wonderful performances, lovely visuals, and an old-fashioned feel.

John Irving scripted this screen adaptation of his 1985 novel. Set during World War II, The Cider House Rules concerns Homer Wells (Tobey Maguire), an orphan who spent most of his childhood at the St. Cloud Orphanage in rural Maine, where he grew up under the strong but affectionate care of Dr. Wilbur Larch (Michael Caine). Larch has passed along his medical education to Homer, and the young man helps the doctor care for abandoned children and the newborn babies of unwed mothers; however, Homer refuses to assist Larch with the illegal abortions that he performs on the side; Homer has moral objections to abortion, while Larch believes in the rights of the individual and sees it as his duty to keep women in need away from dangerous incompetents. Wally Worthington (Paul Rudd), an air-force pilot, brings his girlfriend Candy (Charlize Theron) to St. Cloud for an abortion, and Homer decides to go with them when they leave, hoping to see the world; however, the three end up going no further than the state line, where Wally's mother (Kate Nelligan) runs an apple orchard and cider mill, and Candy's family traps lobsters. When Wally ships off to battle, Homer grows closer to Candy, and the two fall in love. But their idyllic life at the cider mill is interrupted when Rose Rose (Erykah Badu), a field worker at the orchard, becomes pregnant and her father, cider-house foreman Mr. Rose (Delroy Lindo), turns out to be the father of her unborn child. This news coupled with the death of Dr. Larch, forces Homer to take a long look at both his moral principles and his future. Rapper Heavy D appears in the supporting cast as Peaches. ~ Mark Deming, Rovi

Erik Per Sullivan
as Fuzzy